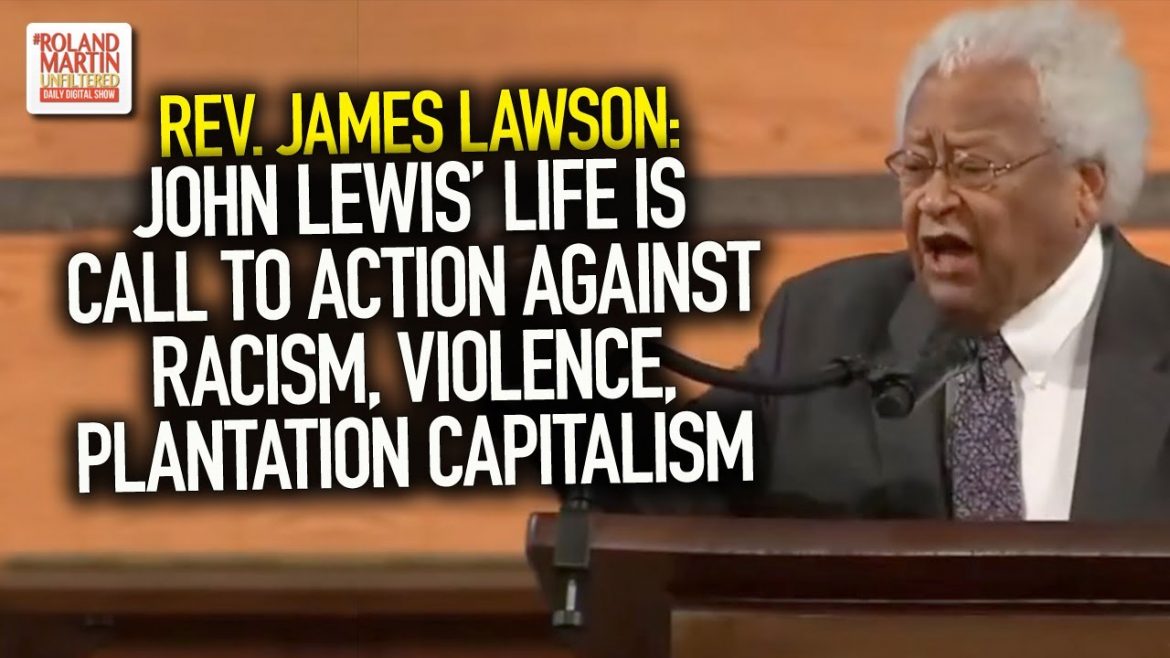 Rev. Lawson took special care to set the record straight about Rep. Lewis and the movement saying, “John Lewis called what we did between 1953 and 1973 the nonviolent movement of America, not the CRM. I think we need to get the story straight, because words are powerful. History must be written in such a fashion that it lifts up truly the spirit of the John Lewises of the world.”

During his remarks Lawson proclaimed “We will not be quiet as long as our economy is shaped not by freedom but by plantation capitalism that continues to cause domination and control rather than access and liberty and equality for all!”

Read a portion of Rev. Lawson’s eulogy of Congressman John Lewis below and watch the full version of his eulogy in the video above.

Rev. James Lawson: I have read many of the so-called civil rights books of the last 50 or 60 years about the period between 1953 and 1973. Most of the books are wrong about John Lewis. Most of the books are wrong about how John got engaged in the Nashville campaign of 1959-60. This is the 60th year of the sit-in campaign which swept into every state of the union, largely manned by students because we recruited students. But put up on the map that the nonviolent struggle begun in Montgomery, Alabama, was not an accident, but as Martin King Jr. called it, Christian love has power that we have never tapped, and if we use it, we can transform not only our own lives, but we will transform the Earth in which we live.

I count it providential that as I moved to Nashville, Tennessee, dropping out of graduate school, in Nashville came people like Kelly Miller Smith and Andrew White and Johnetta Hayes and Helen Roberts and Delores Wilkerson, and John Lewis. And Diane Nash, C.T. Vivian, Marion Barry, Jim Bevel, Bernard Lafayette, Pauline Knight, Angela Butler. How all of us gathered in 1958 and ’59 and ’60 and ’61 and ’62, in the same city at the same time, I count as being providential. We did not plan it. We were all led there.

And when Kelly Miller Smith and the National Christian Leadership Council met in the fall of 1958, and we determined that if there is to be a second major campaign that will demonstrate the efficacy of satyagraha, of soul force, of love truth, that we would have to do it in Nashville. And so, I planned, as the strategist and organizer, a four-point Gandhian strategic program to create the campaign. We decided with great fear and anticipation we would desegregate downtown Nashville. No group of black people or other people anywhere in the United States in the 20th century, against the rapaciousness of a segregated system, ever thought about desegregating downtown. Tearing down the signs, renovating the waiting rooms, taking the immoral signs off of drinking fountains.

But it was black women who made that decision for us in Nashville. I was scared to death when we made that decision. I knew nothing about how we were going to do this. I had never done it before. But, we planned the strategy. John Lewis did not stumble in on that campaign. Kelly Lewis Smith, his teacher at ABC, invited John to join the workshops in the fall of 1959 as we prepared ourselves to face violence, and to do direct action, and to put on the map the issue that the racism and the segregation of the nation had to end.

And so, on the 60th anniversary of that sit-in campaign, which became the second major campaign of the nonviolent movement of America—those are not my words; John Lewis called what we did between 1953 and 1973 the nonviolent movement of America, not the CRM. I think we need to get the story straight, because words are powerful. History must be written in such a fashion that it lifts up truly the spirit of the John Lewises of the world. And that’s why I have chosen just to say a few words about it …